Log in Register
Search
Menu
Log in
Register
Install the app
You are using an out of date browser. It may not display this or other websites correctly.
You should upgrade or use an alternative browser.

Please help me understand what’s happened to my floor grout

My tiled bathroom floor is new but I have moisture seemingly seeping up through the grouting in some places. The affected grouting has taken on an orange colour with crystallised minerals of some kind in it.

The floor is wooden floorboards, with some kind of baseboard on top (not sure of the correct name), wired underfloor heating, self levelling compound then adhesive, then tiles.

The bathroom was completed in September but as soon as I was allowed to use the shower (over bath) I realised only cold water was coming through. The following morning I also noticed a wet patch on the wall on the other side of the wall near where all the pipework is. The fitter returned and found a small leak from the shower pipe and fixed it. However, I also noticed an area of floor grout near the bath, but not tiles, was wet even though I hadn’t actually been able to use the shower yet. The fitter didn’t know why that was, told me he found no water on the tiles beneath the bath when he removed the panel, and dismissed it.

Over the weeks though other areas of grout have become wet and stained orange and my floor now looks awful. I am convinced there is a small leak somewhere and it is seeping along beneath the tiles and soaking up through the grouting, bringing with it minerals, perhaps from the self levelling compound or adhesive?

I’ve not noticed any signs of water on the ceiling downstairs below my bathroom, thankfully, so I guess the water is being trapped between two of the new layers put on my bathroom floor.

I’m waiting for my fitter to return to ‘take a look’ and I’m sure he doesn’t believe me. But this is the only logical explanation to me and I’m dreading being told that everything needs to be ripped out and up so it can be remedied.

What I’d like to know please is if my explanation sounds plausible? Could a water leak seep along beneath tiles and bring minerals from the compound up through the grout and stain it? The ‘minerals’ feel a little oily to the touch and have a slight chemically/metallic smell to them.

The grout is actually crumbling in one pic .. are the tiles loose ?
As for the wetting , i would say theres a leak somewhere and could be the reason the tiles are loose if the boarding for the floor is swelling.. what subfloor was used ?
Www.tilernewtonaycliffe.co.uk
Upvote 0
OP
S

Thanks for your reply. That one tile did have very slight movement in it, yes. It seems to have stopped moving now but that’s definitely the reason for the cracked grout.

I’m not sure what type of subfloor they used unfortunately.
Upvote 0
T

I believe efflorescence can occur if it was grouted prior to the adhesive drying for the required time, this generally has a furry/salt crystal type appearance. Discoloration could be down to the types of cleaning products used.

As above could be a leak. In one of the pics there looks like a water mark running down the wall and skirting, is there anything above it that might leak like a window or something. It might not be, its difficult to see properly from the photo . 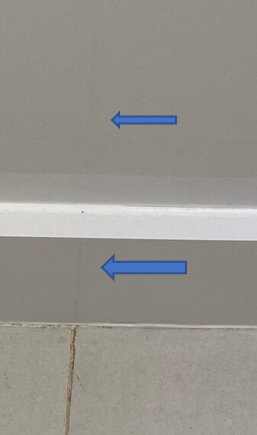 I believe efflorescence can occur if it was grouted prior to the adhesive drying for the required time, this generally has a furry/salt crystal type appearance. Discoloration could be down to the types of cleaning products used.

As above could be a leak. In one of the pics there looks like a water mark running down the wall and skirting, is there anything above it that might leak like a window or something. It might not be, its difficult to see properly from the photo .
View attachment 124977
Click to expand...

I see what you mean about a leak but that’s actually a reflection of the grout line below. What you’re looking at is the gloss MDF bath panel rather than a wall.

I know that water hasn’t fallen or run down onto the tiles because I covered them with a towel during a long shower. Afterwards I removed the towel and the tiles were dry but slowly, moisture started appearing in the grout which I discovered when pressing tissue down onto the grout.

I’m convinced it’s a leak from under the tiles as the staining grows week on week. I just don’t understand the orange/rusty-looking crystallisation.
Upvote 0

Reply to Please help me understand what’s happened to my floor grout in the UK Tiling Forum | Tile Advice Forum area at TilersForums.com

D
Thin Porcelain solution to remove cement/ grout off
Hi, my name is Eddy, my forum nickname is Dobalganero. I am looking for advice here. I hope I can get help. My son-in-law offered to grout the walls of our bathroom but he did not take the grout off quick enough, he let it rest there for some time and even plastered some around the tiles. Does...

Oct 11, 2021
hjb333
H
C
Emergency Help suggestions for Removing Grout!
Hi all, new here and I need some desperate help. Recently got my dad to tile my kitchen backsplash, took a while as it’s was a herringbone style with lots of cuts, but once the tiles were on the wall it looked really good and was worth the extra time and effort. I brought all the adhesive and...

Nov 17, 2021
eddcottee
E
G
Advice please - Spacer/Joint between wall tiles
Are there any BS standards covering this please I have recently had 3 sides of a shower tiled, each side approx 750mm, tiles are 330 x 250 laid landscape and stacked, the tiler says he has used 2mm spacers, the ceramic tiles are good, square and flat out of the box. We have 2 vertical joints...

Nov 15, 2021
Trigger
T
M
Two different tiles laid down-who’s at fault and whats a fair outcome?
Had a tiler in to tile a living room (12m2). Bought the tiles ourselves. Came home to the job done and noticed slight colour variants in the tiles laid down. Pointed it out to the tiler who said he had noticed the differences in the tiles but the codes on the tiles were the same so he kept...