I'm having my kitchen renovated and the tiler came last week and did the floor tiles. They're 175x200mm Porcelain hex tiles. He laid the tiles onto no more ply cement board that was put down by our builders. The day after the tiling I realised the floor isn't flat - almost every tile is not level relative to the tile next to it in random directions and quite a lot of them are wonky. There's some small steps between some tiles (1-3mm) and the grout lines vary between 3-7mm. There's also missing grout in loads of places but I assume that's easily fixed, i'm more worried about the uneveness/unflatness of the floor. From a distance it looks ok, but I can feel it's not flat when i walk on it and some of the worst steps are in high traffic areas (e.g. in front of the hob/top of the stairs).

I flagged the issues with him and he says he can fix it by taking out the worst tiles and relaying them (and already had his chisel out before we finished the conversation), but as almost every tile is uneven to some degree I'm not convinced this would fix the floor. He also said he cant make it flat because the floor he laid onto wasn't flat, but he didn't mention this before tiling otherwise I could have asked our builders to fix it if there was an issue. The floor tiles that were taken out as part of the renovation were not to our taste (inherited them from the old owner) but they were very flat so i can't imagine it would be impossible to lay a flat floor.

He also tiled on top of the edge of the carpet at the top of the stairs (its a 1st floor flat and the kitchen leads to the back staircase and we tiled through to the top step) and put an L shaped trim in to cover the tile edge. We hadn't discussed this, i assumed he would just tile to the edge of the cement board and we could find a stair nosing later to cover the join. I can't imagine this is stable enough to not crack over time? I can also see the tile adhesive between the carpet and the tiles when I walk up the stairs. I flagged this and he said it's fine/stable.

Also he made a skirting board out of the tiles on one wall (which we ask for) but there's only a tiny grout line between the floor tile and the skirting - is this ok? In the bathroom the tilers siliconed the floor/wall join instead of grouting it and i thought this was standard?

He's already taken up about 15 tiles but the ones he's put back again are worse than when he took them out as he didnt remove the adhesive from the floor, and he's used some sort of glue to fix them again.

I'm just wondering now if there is a particular level of flatness that should be expected from floor tiles? If he sorts out the worst of the steps but the rest of the floor is wobbly/wonky is that considered acceptable? I said i had expected the floor to be flat and he said to do that he would have had to have checked every tile - I had just assumed this was a normal part of the job?

Would anyone be able to tell me what would be considered acceptable and what I can ask to have rectified?

Can you post some pics please?
It would help if you have a long straight edge too (something like a 6ft level) to illustrate the unevenness.

On seeing the pics, we can provide a “fair” assessment rather than jump to tell you it’s a poor job.
OP
A

I'm not really sure how to take a picture of it to be honest. Do any of these help? I don't have a 6ft straight edge, so just used a 60cm level. 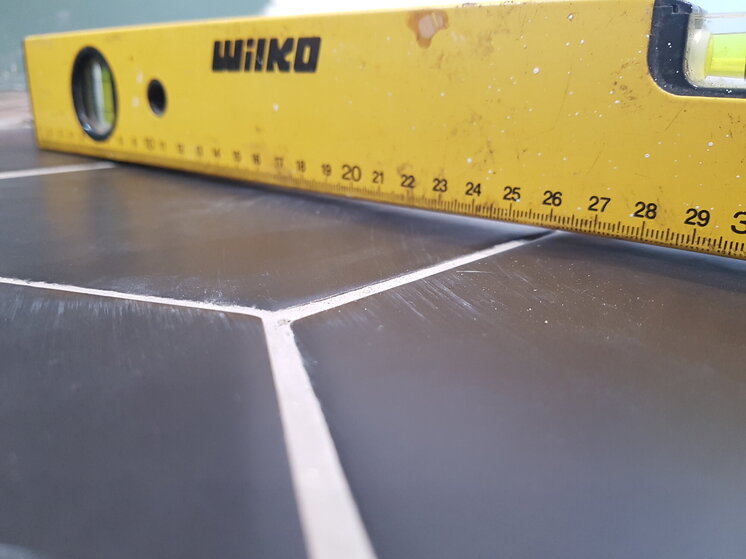 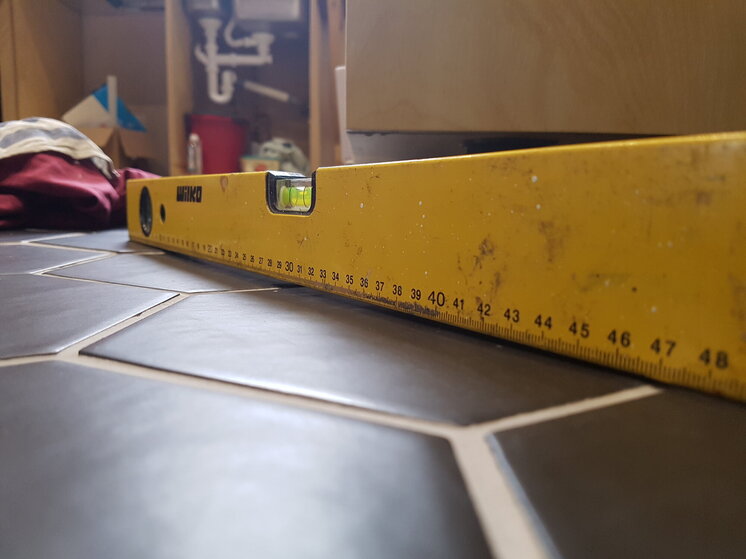 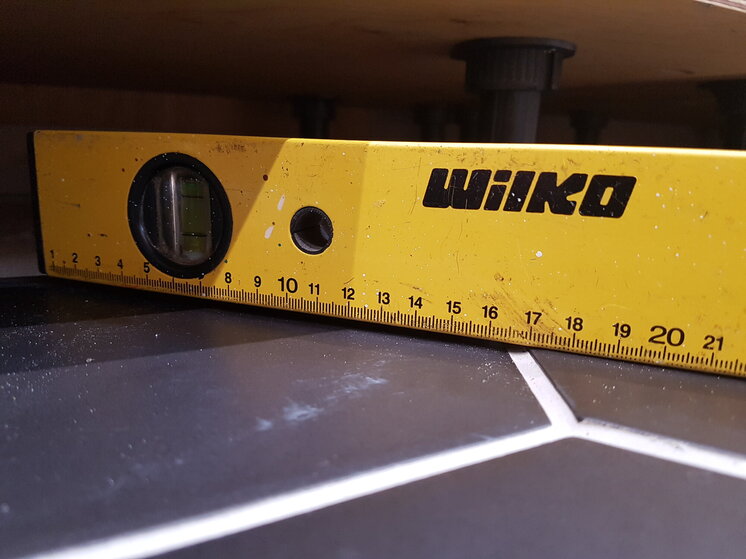 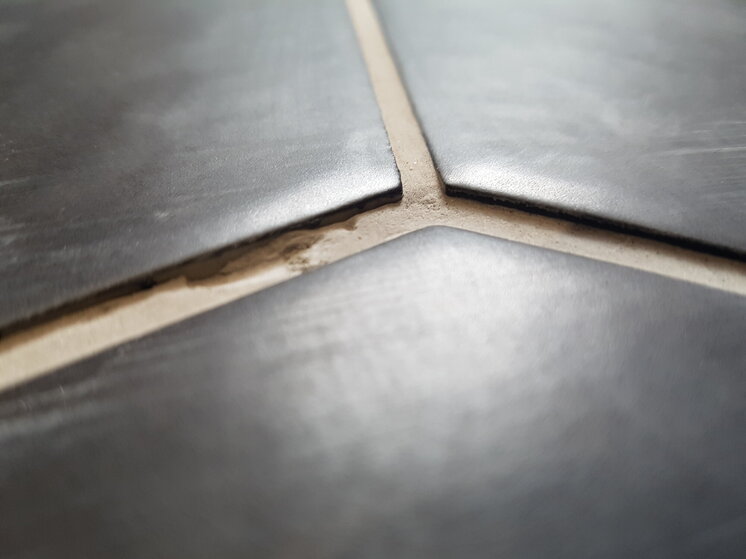 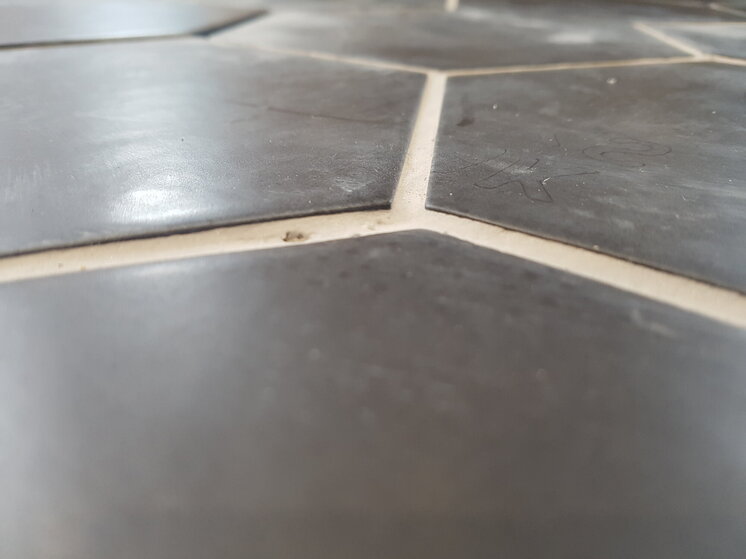 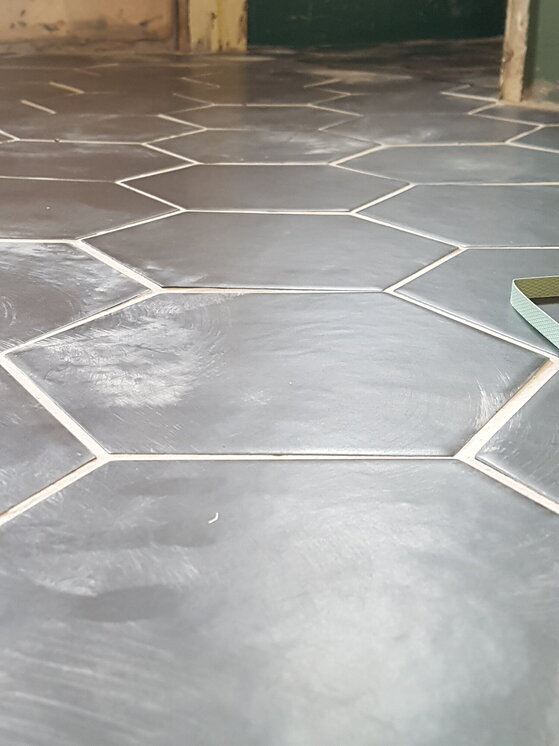 Not much the tiler can do if the floor isn't level to start with unless he uses a much bigger tile. The tiles don't appear to have lippage so I would say the prep work was poor.
As for the grout that's souly the tiler to blame

No that is not good enough in my opinion that lippage is excessive, the grouting is poor and the floor should have been levelled before tiling. Maybe a conversation with the builder and tiler will help matters and they can discuss this with you

I
Tile to ceiling - salvage of bad tiling
Here’s my suggestion. Firstly, finish the grouting of all the tiles. Paint the ceiling. When both these are dry and...

B
Is this tile job poor? Bathroom + WC Room, Currently ongoing
Yeah mate it’s not the best of Job but I’ve seen worse

Nov 9, 2022
Sk-cookie
S
T
Tile removal in the center of a floor?
Once old one out, take feet off the new one too and fit it on shims. This will be easier with an inflatable air wedge.

Solution for suspended floor with chipboard Wet UFH?
I'm a total tiling beginner having my kitchen/diner redone by builders. The dining area has a concrete subfloor, and...