This official sponsor may provide discounts for members

Discuss Tiles cracking On conservatory floor in the Tiling over Electric Underfloor Heating area at TilersForums.com

i have a conservatory floor which is 33 sq mts in a L shape
It had a level screed over the pipes and was. very flat as laid with a laser, backed up by tiler who said it was within 1mm all over.

I used a proffesional tiler and was laid with mapei? Both tile and grout cement.
The floor was laid in 2017 and after a year the tiles started cracking by both doors, a double set each end.
Then last end of 2018 we got a couple of cracks in the middle across about 4 tiles.
There’s no difference in height or it’s less than 1mm, it’s like the surface has cracked so I don’t know if it’s expansion or heave.

Was the UFH turned on and bought up to temperature before the tiling...
J

Every thing was done by the book reguarding commissioning and materials, I kept the stated pressure during screening as I had my own pressure tester.
It is on constant during the winter at 21 dog and turned off in the summer, the conservatory gets sun morning and noon and in between it gets some sun
J

The cracks by the door were after 12 months the other 2 nearer the middle appeared after last summer.
It’s been down 3 years
F

Any photos and are the tiles loose or just cracks ?
J

what are the tiles?

How thick was the screed? And what was that screed on?
J 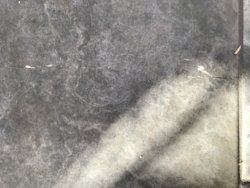 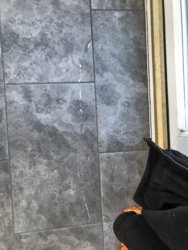 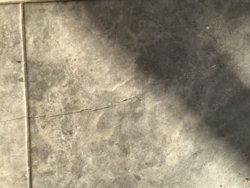 Floor is 4” polystyreneslabs pipes laid on top, screed I can’t remember but was the standard required for that type of floor. 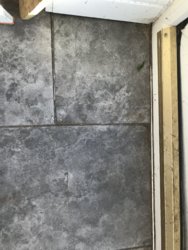 I have plenty of spares to replace them

Looks to me like your screed has settled
B

look like BCT to me.... or something similar
J

The tiles look like they were made by British Ceramic Tile and are not suitable for floors, especially heated ones.

Although the boxes had 'Floor & Wall tiles' on them, didn't mean they were good enough.

BCT have recently gone out of business.
J

Same thing Jim .... can you show us a photo of a box and the back of a tile that hasn't been fixed, please?

Across the doors it will be settlement on the stringer course of bricks that have cracked. The 4 in the middle will be as @Tom Astley - poor quality ceramic tiles not able to take the screed expansion.
J

Ill have to maul one out from the garage

Good spot Tom, looking closer they look like ceramic and not a good quality porcalain tile
B

Bct made the B&Q range.

When b&q dropped bct as a client, BCT folded.
You must log in or register to reply here.

Reply to Tiles cracking On conservatory floor in the Tiling over Electric Underfloor Heating area at TilersForums.com