This official sponsor may provide discounts for members

Discuss Tanking details: Wetroom floor on joists with flush linear drain and wet UFH. in the Tanking and Wetrooms Forum area at TilersForums.com

What member type are you?
Homeowner, DIY Wall and Floor Tiler

Hi,
I'm new to the forum (and tiling / bathrooms) and appreciate the many threads that I have been learning from. If anyone had a moment to comment on the tanking and drain plan for my new attic wetroom I would be very grateful. I'm doing all the work myself, learning as I go. I'm most interested in feedback on waterproofing effectiveness but comments on other features would be great too.

1. Buildup: Floor area is ~ 2m x 2m. I have installed new joists (to regulation deflection), and plan the following floor build-up (see picture):
wet-UFH clipped in Al spreader plates (I already have this in the rest of the house but under screedboard); 18mm structural ply on the joists; 6mm hardie-backer (because thermally conductive) attached with tile adhesive and [short!] screws; Ardex WPC; adhesive; 10mm porcelain 600x600 (e.g. Topps Tiles Regal).

2. Is more stress relief needed? Hopefully the Hardie will expand at a similar rate to the tiles and prevent UFH heat from below from causing cracking - an extra isolation layer seems like overkill in such a small room or perhaps the Ardex functions as stress relief too to some extent? I suppose I could use Ditra instead of Ardex, but as a total novice the Ardex seems easier and less build up, and also the Ardex is useful to seal to the linear shower drain flange (next point).


3. Sealing the drain flange: I have purchased a Mcalpine CD1200-P 1200 mm linear drain and am concerned to get the junction with it properly waterproof. (It was going very cheap - other solutions integrated to formers might have been easier, but more buildup). Picture detail attached. The wood screws shown going through the drain flange, hardie,ply and joist should hopefully keep it mechanically together, though I wonder if I will loose any aspect of movement isolation by doing this. I am planing/ packing the joists (under the ply) so that the entire floor slopes at 15 mm/m (1:69 / 1.5%) towards the linear drain (laser level helped here). Will scrim Ardex joint at drain. Planed joists have been bolted to gable end/doubled to maintain rigidity. I will run tile adhesive trowel lines towards the drain to allow any water that gets past tiles to enter drain.

4. Sealing at wall: The drain will be flush at the back and sides with wall formed from tiles (10mm thick herringbone feature wall) on 12mm Jackoboard on 300 centre studs (seams and penetrations taped and sealed with spare Ardex). I was tempted to bend the drain flange up, but the pictured solution seems satisfactory? Gap under bottom wall tile allows any trapped water to escape.

5. Headroom is in extremely short supply, and water will impinge on the sloped ceiling sections (I'm going to try a rain shower head installed flush to the ceiling slope near the apex - have demoed it in my existing shower and it seems functional at this angle and height). Pictures I have seen of tiled ceilings often seem a bit heavy and overbearing, so I researched alternatives. Microcement was tempting, but expensive and really needs pro installation for a good finish. Tadelakt the same. Any other ideas, or ways to make tiled ceilings blend in? I'm inclined to try a uPVC cladding (Wickes PVCu Interior Cladding, White 167mm with silicone in joints). Not sure if this will look cheap and shoddy though, but figure I can try it, and go to other solutions later on if it looks poor. One tile person seriously suggested I try normal plaster sealed with something (??), but I don't want to be laughed at...

Thanks for reading I will look forward to posting updates as it continues.
Peter 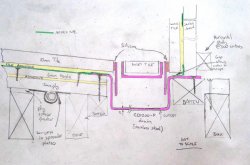 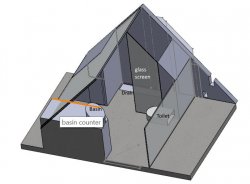 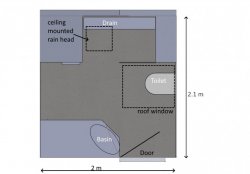 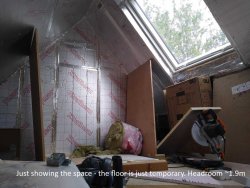 This official sponsor may provide discounts for members
W

Hi Peter. Well there's enough to keep you busy there. There is a company called CCL wetrooms. They are absolute experts in what you are trying to achieve here. They can design and supply what you need if you give them the details (plan, dimensions etc). They are manufacturers and often come up with solutions not only for private households but also some of the biggest builders in the country. If you want the definitive experts advice and guidance then this is where I would go. It might mean ditching your existing drain though as they manufacture their own. Good luck, looks like a nice project.
P

What member type are you?
Homeowner, DIY Wall and Floor Tiler

Hi,
Thanks for taking the time to read my post and the contact to CCL. I have finished the carpentry and have the drain in place now. Writing my post gave me some confidence that my approach looked sound, so given that I'm on a tight budget am going to go ahead.
P
You must log in or register to reply here.

Reply to Tanking details: Wetroom floor on joists with flush linear drain and wet UFH. in the Tanking and Wetrooms Forum area at TilersForums.com

We get it, advertisements are annoying!

Sure, ad-blocking software does a great job at blocking ads, but it also blocks useful features of our website. For the best site experience please disable your AdBlocker.

I've Disabled AdBlock
No Thanks