Who is at fault here? Our builders built a stud wall and secured backer board to it. Our tiler then proceeded to tile onto it. We had multiple tiles crack along one vertical line where the two backer boards met. Upon removing tiles, one backer board was only secured with 6 screws and there were no horizontal batons in the stud. The vertical batons are 600mm apart. 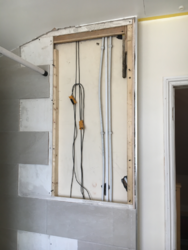 Builder is responsible for the framing and boarding ,it’s his bag. 600mm spacing is to much in that situation, should be more like 400mm spacing. Also the stud on the left is not connected at the top.

I'd say the builder is mainly to blame but I think the tiler should also take some responsibility. If I had to tile that wall I'd either have a word with the builder first or put in some extra screws and fibreglass tape the joints.

Builder mainly at fault, though the tiler should’ve flagged it before install..

A
Tiling onto masonry