Discuss Mosaic tiles lifting in wetroom in the Tanking and Wetrooms Forum area at TilersForums.com

This official sponsor may provide discounts for members
F

So we had our bathroom replaced with a wetroom around 6 years ago and where the water hits the floor and where you stand, all the little mosaic tiles started to lift. This was around 2 years ago. We have reapplied adhesive a few times but it just keeps happening, so resorted to pulling them up around the drain, and now it's unusable.

Why would the tiles lift in the first place? And how do we stop this happening again?
We are thinking of replacing the tiny square mosaic tiles with larger ones in the hope they won't lift again? However, we can only find tiles that are thicker so this isn't helping as the water is then higher than the surrounding mosaic tiles...

Any advice would be greatly appreciated.

I don't know the make of it, as we trusted the installer with all the purchasing etc

what type of wet tray is it.
F

what type of wet tray is it.
Click to expand...

In all honesty, we haven't a clue- we literally put all of our trust in the installer. We said we wanted a wetroom and he provided it. The guy that installed it was a subcontractor for Wickes, so perhaps something they sell? It's also got underfloor heating, but that probably won't help. Sorry!

It's only a very small bathroom and we only replaced our kitchen 18 months ago (directly below bathroom) due to a broken pipe causing a flood, so worried as we don't want another major leak.

What size mosaics are they and can you post a pic.
S

Lots of things it could be unfortunately. Some foam-type boards and trays have a minimum tile size because of point loading. I'd start with that tbh. It would mean lifting the mosaics though.

Steve Eldredge said:
Lots of things it could be unfortunately. Some foam-type boards and trays have a minimum tile size because of point loading. I'd start with that tbh. It would mean lifting the mosaics though.
Click to expand...

My thoughts as well steve.
F

Steve Eldredge said:
Lots of things it could be unfortunately. Some foam-type boards and trays have a minimum tile size because of point loading. I'd start with that tbh. It would mean lifting the mosaics though.
Click to expand...

Thanks, my partner's dad has lifted a large amount of them up around the grid and has removed the old grout. The new larger tiles are now not sticking up above the rest of the bathroom. Hopefully it works otherwise we'll have to get someone out to redo the whole thing?!

Tiles only lifted where water was hitting them/where you stand in the shower- rest of bathroom we had no issues.
S

If it's a foam tray though, it could be damaged through compression. It's worth having a look at it before re-tiling
F

Steve Eldredge said:
If it's a foam tray though, it could be damaged through compression. It's worth having a look at it before re-tiling
Click to expand...

That's a picture of it currently if that's any use? 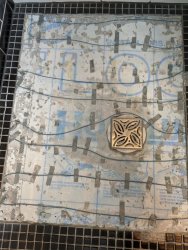 Its hard to see what type of tray has been used as what you can see here is a homelux decoupling mat that has been stuck to the tray as part of the waterproof tanking. The fact that you can still see the writing shows that the adhesive wasn't stuck that well to the mat. If the mat is undamaged and still stuck to the tray it may be OK.....you can't see if its been damaged...but then again you can't see if it hasn't been. I'd isolate your UFH though....don't use it without tile coverage.....the installer hasn't been keeping it evenly spaced. I don't put it into the shower itself....by the time you go into it the warm water has warmed the tiles and the extra heat can dry out the water trap leading to smells from draughts back up the waste.
W

Sorry, this reply may be a little late but I haven't been on here for a while. A number of things took my eye. Firstly it looks like an old AKW Drain, they have a range that they don't promote much called "Level best". If it is, then there is a strong possibility that it's an AKW floor former possibly / probably TuffForm. It looks like the installer has then sourced his own cheaper tanking, possibly Homelux fleece membrane at a guess, because AKW have never sold Homelux tanking to my knowledge. While you have the UTH exposed you might want to move it away from the drain a little if possible. Now it should be evenly spaced so you may not be able to do this at this stage. But UTH should always be kept around 150mm away from the drain. Don't worry, it isn't dangerous. The reason is so that if you were on holiday for example but your UTH was on a timer. It could evaporate the water in the trap. This will result in a smelly bathroom when you get back. Finally, it could be that the floor hasn't been strengthened enough underneath the floor former so that there is NO MOVEMENT. If this is the case (and it's what I suspect) the floor former will move, the adhesive will then fail due to the movement along with the grout. This will result in this situation. There are two valuable lessons here. Always buy your wetroom products from one source (guarantees are not so easy to get away with or avoid). And always always always support your floor former with 18mm ply between the joists, even if the manufacturers say that you do not need to. Tiles do NOT like ANY movement.
You must log in or register to reply here.

Reply to Mosaic tiles lifting in wetroom in the Tanking and Wetrooms Forum area at TilersForums.com

We get it, advertisements are annoying!

Sure, ad-blocking software does a great job at blocking ads, but it also blocks useful features of our website. For the best site experience please disable your AdBlocker.

I've Disabled AdBlock
No Thanks